Rusty guest from the New World

Jerusalem artichoke comes from America. Probably the origin of the plant is in the Andes , as it does not matter much heat or cold. Today, the species is distributed in central and eastern North America and Central America. It is considered a crop of Indians from pre-Columbian times. Early 17th century was discovered in Nouvelle France (now Canada) Jerusalem artichoke among native Indians. These used the tuber as a staple food and for their long migrations, as they appreciated the appetite-inhibiting effect.

As a delicacy to the French court

The French occupiers brought Jerusalem artichokes to France and introduced them there as a delicacy at the royal courts. From there, it quickly spread to Europe and reached an acreage of about 80,000 ha in 1900. The tubers were an important food and feed. There are suspicions that Jerusalem artichokes have prevented famine in historic Europe. The sweet-tasting tuber was displaced by the more storable potato in the middle of the 18th century. Nationwide, only about 500 - 800 ha of Jerusalem artichoke are currently grown.

Jerusalem artichoke was cultivated in large parts of Germany until the 1950s, but was used more and more as animal feed and for distilling schnapps. Its prebiotic, optimizing effect on the metabolism has been forgotten and has survived only in small circles. The urge for simple or even exotic foods has led over the last decades to the Topinambur in Germany almost completely forgotten. It is currently being cultivated in Southern France, the Netherlands and Eastern Europe with low economic importance. In Germany there are only small growing areas. The Jerusalem artichoke manufactory contributes to the preservation of this valuable crop with its organic agriculture.

The main areas of Jerusalem artichoke cultivation are in North America, Russia, Australia and Asia. In recent years, Jerusalem artichoke has been experiencing a minor rennisance as nostalgia for healthy, healthy foods is growing. Topinambur is also often referred to as superfood, that's what it is, and our grandparents still knew about its excellent qualities.

Jerusalem artichoke is a plant of the genus of the sunflower family (Helkianthaceae) and belongs to the family of the perennial (Asteraceae). The botanical name is Helianthus tuberosus ; (Helianthus = sunflower, tuberosus = root tuber) Other names include Jerusalem artichoke, diabetic potato, Tobinambur, Topi, Rossler, sun root, Indian potato, Borbel, Ross apple. In England, Jerusalem artichoke is known as sunroot. Often topinambur is also written Tobinambur, Topinampur or Tobinambur.  The up to 3.5 m up to 4 m high herbaceous plant forms one or more strong, marrow-like stems. These are studded with rough hairy lanceolate leaves. 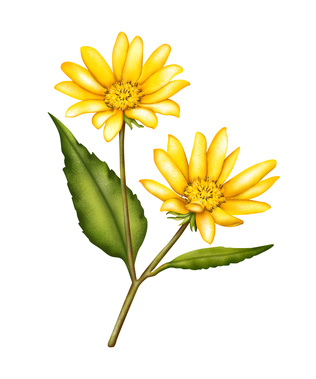 In the period from August to November, small, 4-8 cm-wide, yellow flowers appear . The hermaphrodite flowers sit in the axils of the upper leaves. Seeds do not usually ripen due to late flowering in Central Europe.The plants multiply in our latitudes exclusively vegetative, by their Wurzelknollen . The seeds do not usually ripen.

In July and August, the plant forms on the subterranean foothills elongated tubers, which serve as carbohydrate storage. Out of them, new sprouts will spring from them next spring. The potato-sized ginger-like tubers are a delicacy . The valuable winter vegetables with the multiple sugar inulin offer many positive aspects for the health. Jerusalem artichoke is therefore classified as a medicinal plant . The about fist-sized tubers can be round, oblong or oval, feral varieties form finger-length elongated storage roots. The Jerusalem artichoke tubers are crisp and bit tough like kohlrabi and have a slightly nutty taste with hints of parsnip and artichoke.

Jerusalem artichoke, despite its enormous biomass growth, is an undemanding plant. As a self-sustaining plant, it can remain on the same site for years.The tuber is very easy to harvest in light, sandy soils, so these locations are preferred as growing areas. Topinambur gedeeit but very good on all soils.Basic requirements are soils that have no waterlogging.

Jerusalem artichokes is growing rather hesitantly until June, but then picks up as the year progresses. If the tubers are not harvested, the stems can remain in the field. They provide protection and cover for many animals in winter.

There are a variety of Jerusalem artichokes with different characteristics. Breeding targets concerning the yield are, for example, large tubers, high herb yield or intensive inulin content.  Further targets are earlier harvest time, tuber color and other characteristics. Pioneer of the Topinamburzüchtung in Germany was Dr. med. Küppers from Sonneberg / tired.  The varieties differ mainly in the following points

The most common Jerusalem artichokes are

In Central Europe, Jerusalem artichoke frequently fouls and can cause problems similar to other newly-bred plants (neophytes). Due to the lack of competition, the enormous growth performance and the few predators displaced by inadequate care of the Jerusalem artichoke native plants. Jerusalem artichoke is able to penetrate into an existing plant community and displace it.

Jerusalem artichoke is classified as invasive. In the immediate vicinity of streams and rivers, planting should be avoided because of the risk of tuberculosis spreading through flood waters. To protect the local flora and fauna, Jerusalem artichokes must be looked after and cared for.