Ingredients and Nutritons of Jerusalem Artichoke 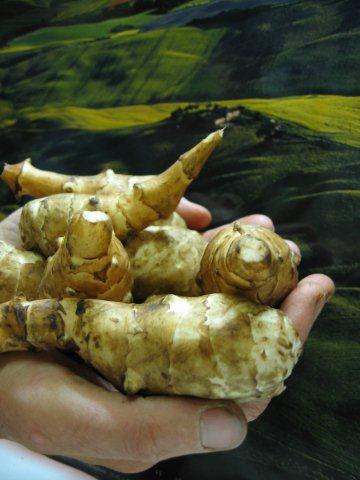 Jerusalem artichoke has been a delicacy since the 17th century. The sunflower species repressed by the potato delights with its nutty-sweet taste. The Indians or Diabetikerkopfoffel is currently experiencing a renaissance of top chefs and health-conscious customers. Jerusalem artichoke has the highest content of inulin for all diabetics and is prebiotic. The "great tuber" is due to the pronounced Ballastsoff- and protein content as an insider tip in diets.

Jerusalem artichokes contain many important vitamins such as carotene, B1, B2, B6, C, D, nicotinic acid and biotin. Jerusalem artichoke has a higher potassium content than bananas (400 - 800 mg / 100g) and contains numerous trace elements .

Ingredients of the tuber

Inulin consists of a chain of at least 10 fructose molecules, shorter chains are called oligofructans or fructo-oligo-saccharides (FOS). They are not degraded by the human organism, have excellent fiber effect and are low in calories  In contrast, individual fructose molecules are digestible and have a high sweetening power.

Diabetics have a "natural sweetener" available with Jerusalem artichoke, as inulin and fructose do not cause insulin during digestion.

Jerusalem artichoke is prebiotic. The development of the positive lactobacilli and bifidus bacteria of the intestinal flora is promoted and the digestive activity is stimulated.  Topical is the satiating and weight-reducing effect of Jerusalem artichokes in light of the increasing problems of malnutrition and obesity.  The phytochemicals (Poyphenole) have antioxidant capacity. As scavengers of free radicals they are said to have anti-cancer and immune-enhancing effects. In Jerusalem artichoke 22 polyphenols are detected.  In animal nutrition, Jerusalem artichoke is a veritable health food crop for pets as well as livestock.  It has taste advantages and influence on feed intake and utilization. Their prebiotic 'clean-up function' can regenerate a damaged gastrointestinal flora and reduce the use of medication.

By selecting "Accept all", you give us permission to use the following services on our website: YouTube, Vimeo, ReCaptcha, Google Analytics. You can change the settings at any time (fingerprint icon in the bottom left corner). For further details, please see Individual configuration and our Privacy notice.

The settings you specify here are stored in the "local storage" of your device. The settings will be remembered for the next time you visit our online shop. You can change these settings at any time (fingerprint icon in the bottom left corner).

To view Vimeo contents on this website, you need to consent to the transfer of data and storage of third-party cookies by Vimeo.. This allows us to improve your user experience and to make our website better and more interesting. Without your consent, no data will be transferred to Vimeo. However, you will also not be able to use the Vimdeo services on this website.

To submit forms on this page, you need to consent to the transfer of data and storage of third-party cookies by Google. With your consent, reCAPTCHA, a Google service to avoid spam messages via contact forms, will be embedded. This service allows us to provide our customers with a safe way to contact us via online forms. At the same time, the service prevents spam bots from compromising our services. After you gave your permission, you might be asked to answer a security prompt to send the form. If you do not consent, unfortunately you cannot use the form. Please contact us in a different way.

To understand how we can improve our shop, we collect anonymized data with Google Analytics. You help us to constantly improve the shop.

We use Google Analytics to collect anonymized data from our visitors.

Would you like to see these contents? Activate the desired contents for one session only or allow the website to remember these settings. Once you have given your consent, the third-party data can be loaded. For this, third-party cookies might be stored on your device. You can change these settings at any time (fingerprint icon in the bottom left corner). For further details, please see the Privacy notice.

Further information {{headline}} {{description}}
Newsletter Subscribe
Please email me the latest information on your product portfolio regularly and in accordance with your data privacy notice. I recognise that I can revoke my permission to receive said emails at any time.
© Die Topinambur Manufaktur
Powered by JTL-Shop | AVIA JTL-Shop Template
Login for registered customers
Forgot password New to our online shop? Register now!